Some books you pick up on impulse, because the cover art is especially appealing, because its title strikes a chord, because you’re in the mood for a specific genre or know the author…

But sometimes, you choose the book you need. This is what drew me to poet Ross Gay’s jewel, The Book of Delights. I was in want and in need of a book that I hoped would bring me joy; a book that would somehow cast an enchantment over me, even for only a few brief minutes, every time I read from it.

Ross Gay is first and foremost a prize-winning poet, which helps explain (and not to my credit) how he could have remained hidden from my book-searching eyes for so long. But you can feel and hear the poet’s distinctive rhythms and beats and inventiveness in the short prose essays in The Book of Delights (few exceed four small pages in length).

The idea behind this little book is simple: on his forty-second birthday, Ross Gay decided that it would be a fun experiment to write a short essay every day till his next birthday, about the things that might pop up that he considered delightful (102 feature in the book). These would be handwritten (no keyboards allowed!) and would thus be able to fit into a notebook he would carry with him, and likely contain more than a few run-on sentences.

It seems to me that this would immediately require a shift in attitude or a greater openness to the world—a greater attentiveness.

When asked by Ari Shapiro, in an NPR interview, whether his focus on delight affected the rest of his day, Gay answered: “Absolutely, I mean, the thing that I—I also discovered in the course of writing this, is that so much of what, to me, sort of inspired or uncovered or unveiled delight was so often personal interactions. So I became acutely aware that delight is sort of a manifestation of interdependence. You know?” […] Like, the simple and the subtle and the almost accidental kindnesses that we’re constantly in the midst of.”

Such as a high five from a stranger; or being tapped on the shoulder twice by “the brother working as a flight attendant” who hands him his seltzer and, just before the two taps, says: “There you go, man”.

But Gay’s roving eye is also attuned to the natural world, and the myriad tiny creatures that inhabit his garden (essay #99 is simply titled Black Bumblebees!) , and the delight of something as simple as pulling carrots, or carrying a small tomato plant onboard an airplane.

Some of us may just be cut out for joy—open to the disruptive or eruptive delights that push their way into the most mundane moments of our lives. Ross Gay seems to be made precisely this way.

Searching online for his writing and his image, or watching him on YouTube, one quickly notices his irrepressible smile, which I think is his default setting. And that says something, doesn’t it?

The Book of Delights, much like Ross Gay’s poetry, is about allowing one’s self to be moved unselfconsciously. Filters can stay locked away. Life, words, all of it, are to be felt and experienced above all else. The flow of Gay’s prose, its momentum, closely resembles his way of speaking. It’s about enthusiasm and exuberance.

But one also senses, and occasionally sees, that this man, his intellect and his heart, do not recoil from exposure, from intimacy, sadness or pain. And so, as suddenly as he smiles and laughs, he can just as quickly cry, caught in a brief welling up of tears.

Ross Gay is also a child born in the United States to a white mother and black father, and none of what is happening in his native country—which he seems to be perpetually travelling across and flying over—ever escapes him, which is why his collection of essays includes such short pieces as “Hole in the Head”, which begins as an exploration of weird vernacular sayings like “I need X like I need a hole in the head”, but immediately veers away and recounts, instead, the life of Vertus Hardiman, who grew up in Lyles Station, southern Indiana—a town established by free blacks in the 1800s—and who was one of a group of children upon whom radiation experiments were performed in the 1920s. Hardiman was 5 years-old when this was done to him, leaving a “fist-sized crevice in his skull…”

In this two-page essay, the poet writes: “I’m trying to remember the last day I haven’t been reminded of the inconceivable violence black people have endured in this country. When talking to my friend Kia about struggling with paranoia, she said: “You’d have to be crazy not to be paranoid as a black person in this country.” Crazy not to think they want to put a hole in your head.”

And then there’s entry #8, The Negreeting, which, I learned (sigh), refers to the manner in which a black man in any given public space will acknowledge the presence of another with a nod.

Where’s the delight in these?

Gay writes: “If you’re black in this country you’re presumed guilty. Or, to come back to Abdel [the author’s friend], who’s a schoolteacher and thinks a lot about children, you’re not allowed to be innocent. The eyes and heart of a nation are not an avoidable thing. And the negreeting, back home, where we are mostly never seen, is a way of witnessing each other’s innocence—a way of saying, “I see your innocence.”

And my brother-not-brother ignoring me in his nice red kicks? Maybe he’s imagining a world –this one a street in Bloomington, Indiana—where his unions are not based in deprivation and terror. Not a huddling together. Maybe he’s refusing the premise of our un-innocence entirely and so feels no need to negreet. And in this way proclaims our innocence.

Joy is such a human madness. It’s a phrase attributed to Zadie Smith, and is the springboard of my favourite entry in The Book of Delights (#14), which considers the beautiful idea that joy cannot exist without pain and true sorrow. Out of this profound essay comes the question: “What if we joined our wildernesses together?”, presented to Gay by a student one day, which astounds him.

“Sit with that a minute, ” he writes. “That the body, the life, might carry a wilderness, an unexplored territory, and that yours and mine, somewhere, somehow, meet. Might even join. And what if the wilderness […] is our sorrow?

And if it is—and if we join them—your wild and mine—what’s that?

For joining, too, is a kind of annihilation.

What if we joined our sorrows, I’m saying.

I was delighted by Ross Gay’s beautiful book. It DID bring me joy every time I opened it. It also, at times, squeezed my heart painfully.

It’s a freeing book. Grace-filled and gracefully written. I highly recommend it. 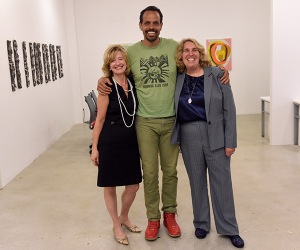 One thought on “THE BOOK OF DELIGHTS”