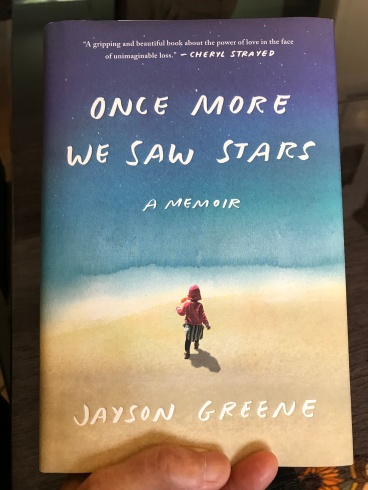 I suppose it’s an instinctive thing. Some readers, upon discovering the tragedy told in the book with a beautiful title, Once More We Saw Stars, will pull back thinking Oh no! I can’t read that, it will upset me; while others will instantly be drawn to it.

On a lovely New York morning four years ago, author Jayson Greene’s two-year-old first child, Greta, was sitting in the sunshine on a bench with her adoring maternal grandmother Susan in front of an old building on the Upper West Side, when pieces of brick fell from a crumbling windowsill on the eighth floor, injuring Susan, and crushing Greta’s skull so severely that within hours, she was pronounced brain dead.

The reader knows this before reading the first sentence of the memoir. The basic facts are on the inside of the dust jacket, but it makes no difference. There’s no shielding one’s self from the horror of such random devastation. And so, the question becomes: how do the people who loved (love!) this child move on? How does one survive the grief? The pain?

In six chapters, the author leads the reader along his deeply personal journey of survival.

Greene, a professional writer and editor who, previous to Once More We Saw Stars, had never attempted a book, reverted to his writer’s instincts, filling in notebooks with his feelings and thoughts—the expressions of his trauma—as though drawn to do so.

We thus follow him from the moment of the telephone call that capsized his and his wife Stacy’s lives, through the long hours at the hospital with family and friends, where the young parents were almost immediately asked to abandon all hope of their daughter’s survival; to the terrible, lucid, openhanded decision to donate her organs (which required keeping her body alive for 48 hours more, though the child inside that little brain was gone).

The love that permeates Greene’s descriptions of his magical daughter is so poignant. Because Greta was a toddler who spoke very early, she was able to make her thoughts and feelings known clearly and soon (she was funny and opinionated), and her father collects these fragments of his baby girl (as he so often refers to her in the book), sprinkling them through the narrative. But, despite her sparkling presence, she was still just a tiny toddler in diapers…

Two years is now, and forever, her whole lifetime.

Jayson and Stacy struggle with the question of how to preserve the essence of Greta. Her spirit. How to curate their memories of her, even as they come home, day after day, to their apartment filled with her abandoned toys, and to her empty room. Even as they attempt to resume a semblance of daily life: going back to work (too soon), walking past the park where Jayson played with her, seeing families with young children, seeing and hearing Greta everywhere and in everything: what she would have said, how she would have reacted…

You would expect every page to be filled with sorrow and pain, and though many are, Greene also offers the reader glimpses of the effulgence that at times accompanies these, as it did one day in the park, when he felt Greta’s spirit everywhere:

“As my chest swells and bellows, I feel her presence filling up my heart, and with it comes a strange exhilaration that I have felt often in the weeks after her death. Grief at its peak has a terrible beauty to it, a blinding fission of every emotion. The world is charged with significance, with meaning, and the world around you, normally so solid and implacable, suddenly looks thin, translucent. […]”

Jason’s pain and grief often bubble up in the form of a raw anger which leads him to find very vocal means of expression in side streets and desolate spaces where he can howl and scream his pain and anger: “I feel the rewarding rush of endorphins; I hear my voice ricochet off the clustered buildings, formidable and full of pain. I listen to the echoes die and feel powerful for once. You can’t hurt us.”

There are many couples who simply cannot survive the death of a child, and yet, one of the lovelier parts of Once More We Saw Stars is how Jayson and Stacy, while searching privately for ways to process their grief, as in this gorgeous passage from the memoir, also seek healing together:

“As for Stacy, I am left to guess at the depths of her grief. As always, she prefers to hide in plain sight, deflecting attention and moving under cover of her inexhaustible sociability. Her relationship to Greta is a sealed sanctum, and I fight with a shameful hunger for glimpses into it.”

Their journey forward takes them to the Kripalu Institute, where they’re guided by a spiritual medium, and later, to a ranch in New Mexico where they participate in a shamanistic ritual. Reflecting upon this period, in an interview for BBC, Greene explained: “I think that we used those moments for connection.”

Ultimately though, it’s the unconditional, unrelenting love and support of friends and family that helped pull them forward.

Once More We Saw Stars is a literary work to be embraced.  Not far along in it, Jayson Greene writes:

“One of the main things I don’t think people realize is that a broken heart is an open heart. […] that can be healed, can be changed, can be re-formed, can grow new patterns for new types of love. One of the things I want us to work on is to begin to find ways to take that broken heart and allow it to feel the pain, but to grow.”

This is a message that resonates deeply in me, and that I know to be true. It is a lovely encapsulation of the mystery of suffering. It isn’t bleak, but rather infused with light.

“To get back up to the shining world from there
My guide and I went into that hidden tunnel;
And following its path, we took no care
To rest, but climbed; he first, then I–so far,
Through a round aperture I saw appear
Some of the beautiful things that Heaven bears,
Where we came forth, and once more saw the stars.”
—Dante Alighieri, Inferno