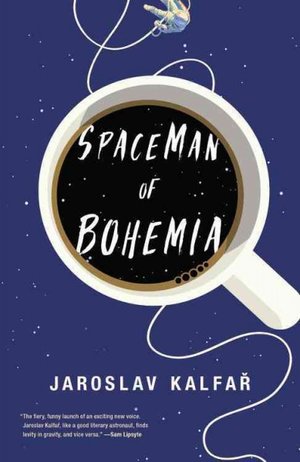 I knew as soon as I started reading Spaceman of Bohemia that I’d be sad to leave it behind—sad to come back to earth—and I found myself at once pushing to get to the end of it and wishing it could go on and on.

Jaroslav Kalfař’s debut novel, published just weeks ago, is getting lots of attention, and it should be. It’s been described as a satirical romp, zany and fiery, and all of these certainly fit. So do witty, brilliant, expansive, funny, sweet and melancholy.

For better or for worse, my own appreciation and attachment to novels is very tied to the immediate emotional response I have to them, and a few pages into Spaceman of Bohemia, I already knew that I’d found an original, wonderful book.

“MY NAME IS JAKUB PROCHAKZKA.”

As opening sentences go—though it is written in uppercase letters—this one is about as underwhelming as they get. And yet, by the second paragraph, this same Jakub is strapped into the space shuttle JanHus1 and hurtling towards outer space, sent by the government of his home country, the Czech Republic, on an improbable and impossibly perilous and lonely mission.

The year is 2018, and an unknown comet from another galaxy has swept through the Milky Way, leaving behind a storm of purple intergalactic dust that has settled over Earth and Venus. Its discoverers in New Delhi have named it Chopra, and Jakub, travelling solo on an eight month return trip, is tasked with capturing its particles in the hope that these will reveal incalculable insights into the worlds beyond our chemistry and perhaps even proof of extraterrestrial life.

Instead, Kalfař immediately takes a sharp turn. It appears that Jakub is not alone in his spaceship. What he first believes to be his stressed-out mind playing tricks on him turns out to be a large, black, spiderlike creature with eight hairy legs, a round belly, lots of eyes that can all focus in the same direction, and full, bright red lips set in a gaping mouth filled with yellow teeth.

But this is no Ridley Scott movie, and, like Jakub, we’ll never be quite sure whether the creature is real, or a figment conjured from the spaceman’s isolation.  It’s says something about the charm and emotional grounding of the characters in Kalfař’s novel that it doesn’t really matter. What we know, almost immediately, is that the creature is a galactic hitch-hiker of sorts, and wishes Jakub no harm. Rather, it describes itself as a traveler, an explorer and a scholar, and communicates telepathically with Jakub, searching through his mind—especially his memories—intent on “learning the secrets of humanry” in a manner that Jakub experiences as “a mild brain freeze”; a feeling that “[…] is not entirely unpleasant.”

Jakub names the creature Hanuš. In turn, it seems content to refer to Jakub as Skinny Human (perhaps because he is, in fact, eating Jakub out of spaceship and home!).

On the surface of things, the relationship between these two characters is silly and sweet: a Czech Han Solo with his arachnid Chewbacca. Having finished the novel, I’m now prepared to describe it as one of literature’s beautiful friendships.

Hanuš’s explorations of Jakub’s mind take us back in time. It’s the device that allows us to discover Jakub’s childhood in Communist Czechoslovakia and get an up-close look at life in the One Party State with its secret police. It’s how we learn of his father’s dutiful work as a secret policeman who dispassionately tortured his neighbours and others by day and loved his family by night, listening to clandestine Elvis Presley recordings and dancing around the house with his wife.

It’s how we discover Jakub’s childhood life away from Prague, at his paternal grandparents’ country house; his deep and trusting relationship with them both, but especially with his grandfather, a man whose idea of ambition was very different than that of his son, focused as it was on building things with his own hands and living more simply, away from the spheres of power and struggle.

It’s here that we meet Shoe Man, one of Jakub’s father’s victims, who exacts a slow and destructive revenge that ruins Jakub’s grandparents’ lives.

Spending so much time inside a protagonist’s mind can be overwhelming. There were moments, especially in the last third of Spaceman of Bohemia, when it felt like Jaroslav Kalfař, hedging his bets against the possibility that his novel’s publication was a one-off, had thrown into his book every meaningful idea, passion, insight and phantasmagoria he’d ever conceived of, wrestled with in his own mind and consigned to a notebook.

In time, I realized that Jakub and his creator are romantics on the grandest scale. Jakub’s connection to Lenka, the love of his life and the woman he leaves behind in his quest for fame and redemption in space, is the most important of the contrapuntal relationships in his story. The passion, sadness, beautiful honesty and intimacy they share are at once compelling and searing. The reader feels that their fate is sealed.

Jakub is propelled through his life by the dialectical interplay of two ways of seeing and coping. The first

“[…] consists of dreading the chaos, fighting it and abusing oneself after losing, building a structured life of work/ marriage/ gym/ reunions/ children/ depression/ affair/ divorce/ alcoholism/ recovery/ heart attack, in which every decision is a reaction of the worst.”

[…] an across-the-board acceptance of the absurd all around us. Everything that exists, from consciousness to the digestive workings of the human body to sound waves and bladeless fans, is magnificently unlikely. […] This is the way to survive in this world, to wake up in the morning and receive a cancer diagnosis, discover that a man has murdered forty children, discover that the milk has gone sour, and exclaim, “How unlikely! Yet here we are.””

Jakub’s journey ultimately reconciles him with the latter.

This is masterful storytelling, and lest we doubt that we’re reading a tragedy, Kalfař sets his novel against the backdrop of the opera Rusalka, which is full of foreshadowing.

In what I consider the most beautiful passage in the novel, Jakub and Hanuš have finally reached the dust cloud Chopra and perhaps, also, their doom. For this extraordinary moment, Jakub has chosen to play a recording of Rusalka, which he first listened to at his grandmother’s side, and which was his mother’s favourite. Recollecting this moment with his alien companion, Jakub muses:

“Love didn’t seem worth all this trouble, especially in the end if the lovers were torn apart. But now, hearing Rusalka in Space for one last time, I saw that the water goblin’s declaration [that “All sacrifice is futile”] was wrong. There was no futility in me, in Hanuš, in Lenka, […] in the stubborn human eye always looking beyond, under, next to, below. In the atoms composing air and planets and building bodies, puttering around and holding up an entire dynasty of life and anti-life. Futility was nowhere to be found.”

After reading through this scene, early in the morning, I went online to find Rusalka, and sat quietly, tears having just begun to wet my face, and played a video recording of René Fleming singing Rusalka’s Song to the Moon, in the company of the spaceman of Bohemia.

How unlikely! Yet here I was.

5 thoughts on “SPACEMAN OF BOHEMIA: APART, BUT FREE”