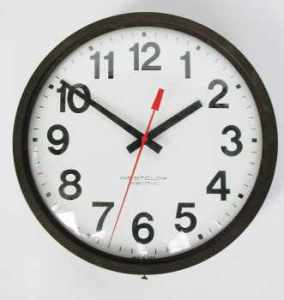 I love the work I do as an educator, moving from one company to another to teach French to small groups of adults. It’s a deep source of fulfillment. But one of the down sides of my calling is that it has created a tension in my life between clock time and the universal, internal time that I feel an increasingly sharp need to live by.

Few workers look at the clock more than teachers, whether they’re in large, institutional classrooms or, like me, in smaller conference rooms. Our schedules already carve our working days up into boxes called periods, and within those, we’re always managing time, glancing at the clock on the wall—or in my case, the app on my smart phone— to adjust our pace, to make sure that we cover what needs to be covered. To be sure we don’t run out of time.

That feeling of time pressure now spills over into other parts of my life, and it’s oppressive. I don’t remember when it began, but it has built and built.

While driving recently, I stumbled onto an episode of CBC radio’s Spark, titled “Finding Meaning in Doing Nothing”. 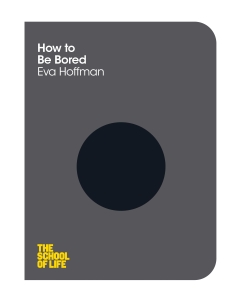 Listening to host Nora Young’s soothing voice is always a pleasure, but this time, there was the bonus of her guest, Eva Hoffman, who was there to discuss her most recent book: How to Be Bored.

Though its title is tongue-in-cheek, the work itself is a thoughtful exploration of the desperate need many of us now feel for free, unstructured time.

In How to Be Bored, Hoffman focuses on what she describes as our overstimulated lives and our addiction to technology. She examines all of the ways we’ve become enslaved by our smart phones and laptops, which she views in the larger context of our very twenty-first century addiction to activity, and the fragmented, abbreviated segments of time that it creates.

“Going from one activity to the next can feel exciting moment by moment, but I think it forestalls the possibility of a deeper sense of satisfaction and pleasure. That needs to come from within and from a sense that we have goals that are more long lasting than our Twitter feed. Without this feeling of purpose we can feel anxious and disoriented.”

There’s no doubt in my mind that she has hit upon something true.

Listening to Eva Hoffman on Spark, I began to think about the uncomfortable momentum I often feel in my own life, as though I’m being pushed forward on one of those flat gliding airport carpets that move people along without their even having to walk—except that mine keeps going faster and faster, and I have no means of slowing it down, or getting off.

Do you feel this too?

There just doesn’t seem to be enough time for quiet reflection; for disappearing into a calm and peaceful space; for stillness.

What Eva Hoffman refers to as healthy boredom, Pico Iyer simply calls The Art of Stillness. Iyer, who has travelled the world in his work as a journalist and writer, is a brilliant observer of life and an intuitive philosopher.

What I love most about him is the way he’s able to express in clear, gentle and evocative speech and prose his singular vision of the world: a perspective that’s informed by his expatriate upbringing and his nomadic existence— and one that he’s eager to share.

Iyer speaks of “bringing stillness into the motion and commotion of the world”, and of “[…] sitting still long enough to find out what moves you most, to recall where your truest happiness lies, and to remember that sometimes, making a living and making a life point in opposite directions”.

But in fact, looking at the world with more attentive and appreciative eyes isn’t so much about sitting still as it is about going nowhere. It’s about simply being with oneself, removed from our “on demand” lives. It’s about finding a second home in time, if not space.

Iyer achieves this in his own life at the rustic home he has in Japan where there’s no internet connection and no phone line. An extraordinary luxury, I think.

But there are many paths to going nowhere. Going for a long walk or even a run, paradoxically, can be a way. But so can listening to music. Or reading.

What do you do to escape your scheduled life?

I’ve been practicing yoga for three years now and am observing a quiet space opening up inside myself. I’ve also found that the solitude I experience in a tea room or small café, where I go to sip in silence or, even better, to read quietly, is immensely calming and helps restore balance in my life.

And of course, there’s the retreat that nature provides and the calm that comes when sitting under a tree listening to the leaves and the birds or watching the sky and stars…

The balance between doing and being, action and thoughtful contemplation is fragile. Writer and former hermit Howard Axelrod learned this in the most extreme way. At the age of 21, a freak accident at Harvard, where he was a student, blinded his right eye. With the loss of vision came the loss of depth perception and a slow, profound shift in his perception of life and the nature of reality.

In The Point of Vanishing : a memoir of two years in solitude, Axelrod relates the period in his late twenties that he spent in a remote cabin in the woods of Northern Vermont (you can also hear him discuss his experiences with Mary Hynes on CBC radio’s Tapestry)

What eventually brought Axelrod there and to his choice to live in complete solitude was a sense that his life was no longer on its previous achievement-driven track. He speaks of his desire to escape the façade, the camouflage, the putting on a face for the world.

During the long months of solitude broken only by sparse trips into town to buy provisions, Axelrod discovered what happens when everything has been stripped away. His was an attempt to find the parts of himself that wouldn’t change no matter what happened.

In yoga, this is what’s referred to as one’s centre; Axelrod calls it the inner eye—the place from which we truly see—that place not subject to change. That part of himself that was himself. And he discovered: “That part of us waits, even when we put it aside.”

One of the most fascinating aspects of his story is also cautionary. In the long months that he spent almost entirely alone, his sense of self began to dissolve, and he started to feel “more part of the wind and the rain” and the pull of “a peacefulness beyond everything”. There’s something beautiful but also frightening about those words.

Axelrod had arrived at the point of vanishing of the book’s title.

Luckily, it was then that he decided that it was time to rejoin the world, having realized that the impulse to share, the need for communion with others and the powerful effect of looking into another human face were stronger than the solitude.

“In an age of acceleration, nothing can be more exhilarating than going slow.

And in an age of distraction, nothing is so luxurious as paying attention.

And in an age of constant movement, nothing is so urgent as sitting still.”

If you’re interested in exploring the notions of stillness, solitude, contemplation, peaceful space and the means of achieving these, here’s a short list of inspiring books:

Other books by Eva Hoffman: 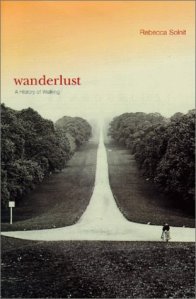 4 thoughts on “THE ART OF STILLNESS”