It’s odd that I waited this long because it came so highly recommended. First, there was my son, a comic book aficionado who had read it when he was still an English Lit student and loved it; and then there was the excitement that surrounded its selection as a finalist in the 2011 Canada Reads competition. I also remember the disappointment and frustration when Essex County was the first book voted off Canada Reads.

That event seemed to confirm the fact that graphic novels were still outsiders and would never be considered serious literature.

Having read Alison Bechdel’s Fun Home, Alan Moore’s Watchmen and V for Vendetta, as well as Marjane Satrapi’s Persepolis, I have no such prejudices. I’m much more concerned that with all of the brilliant writers and artists producing edgy, beautiful, startling, uncompromising and visionary work every day, I’m doomed to be hopelessly behind or maybe even out of touch. 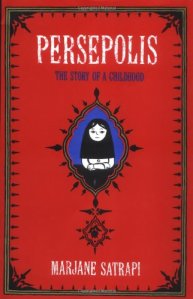 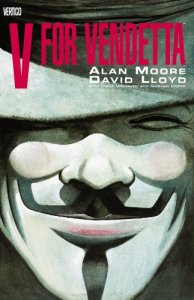 Jeff Lemire’s Essex County (2011) is in fact a collection of three graphic short stories: Tales from the Farm (2008), Ghost Stories (2008) and The Country Nurse (2009), and the only superheroes or post-apocalyptic scenes in the story are buried inside the imagination of Lester Papineau, the sad and lonely young boy who wears a mask and cape through most of Tales from the Farm.

The three stories are all connected. Though they move through time, spanning almost a century, they remain grounded in one place, Essex County, Ontario, which is at the southernmost point of Canada, and is Lemire’s home town.

These elegiac stories are not, however, a revisitation of Lemire’s own childhood, nor are they a return to a historical past.

Working in chiseled strokes of black, white and shades of grey, Lemire presents only the most basic elements of the landscape and townscape: the woods where the boy, Lester, finds solace; the farm and house that sees several generations come and go; the stream where fishing is good and reticent conversations sometimes take place; and the gas station where Jimmy—the man who moves along the edges of Lester’s life—does his best to get by.

There is no real town in this story; no place to bring people together, and so they live quietly and apart, scattered through a county that time forgot, or perhaps, the land that memory refused to release from its grip.

Even the human landscape is sparse.

Tales from the Farm revolves around the relationship between Lester Papineau, the orphaned boy who lost his mum to cancer, and his “uncle” Ken, who makes good on his promise to take the boy in and care for him. On the periphery of their lonely world is Jimmy, who struggles with the effects of the brain damage he sustained as a pro hockey player.

Ghost Stories brings us back to the lives of Lou and Vince Lebeuf, close knit brothers who one day leave the farm to go off to Toronto to play professional hockey, one with ambition and the other, with reluctance, only to be alienated from one another by a heavy secret. 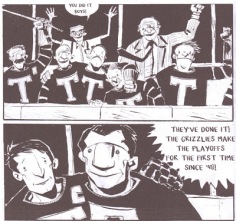 The Country Nurse belongs to Anne Byrne—a character with wounds and a loneliness of her own—whose movements in and out of the other characters’ lives bring all of the stories together. On page 447 of the book, we’re given the genealogy of these families with so few branches, but we’ve already understood everything that matters most.

Essex County is unexpectedly affecting and nothing like I imagined.

I think it’s the book that Jeff Lemire has been carrying around inside himself all his life; I think that every word and every panel had already been worked out in his mind down to the last detail. It feels very personal and expresses a strength of emotion that one draws from the deepest memories and feelings of childhood.

What I thought I would find under its covers was a coming of age story; a long, winding, colourful and evocative narrative about one boy’s life, adventures and heartbreaks. But Essex County is more focused than that.

Lemire’s handful of characters are finely drawn—literally and figuratively.

He makes brilliant use of splash pages, and with simple variations in the thickness and shading of his pen strokes, creates a scene that moves from the present to a flashback, or to a haunting memory (these are always in the gentlest greys).

With the exception of Anne Byrne, the country nurse who is the embodiment of maternal nurturing and energy, this is a very male story. In a quintessentially Canadian way, hockey plays an important part in this book about hopes, broken dreams and the losses that come with aging.

There are also the silences. Essex County is filled with them. Lester and all the men on these pages speak seldom and in terse phrases. 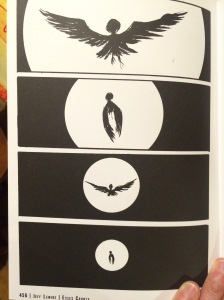 Perhaps the crow is standing in for Jeff Lemire, overseeing his beautiful and solemn creation.

This post ushers in a new category at the Online Book Club: Comic Books and Graphic Novels. Expect to see more  in the months to come!

Other books by Jeff Lemire available at the Library: