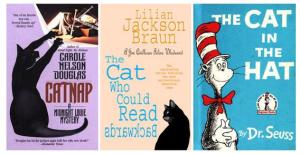 My first pet was a small dog, Mickey. He came to us when he was about 5 years old. His previous owners, who were moving to Laos, had taken him in from a shelter, and then he was ours.

My second pet was a cat we named Erin. She was a sweet little tabby who loved people and was very affectionate. She even followed us to the bus stop every morning and waited with us till the bus picked us up.

She was what’s known as a dog-cat. She lacked the haughty independence of a true cat-cat.

I’ve observed, however, that most people have a distinct preference and that there seems to be a divide between cat people and dog people. And that got me wondering whether this carries over to our reading preferences.

Because there are plenty of great books and movies on the library’s shelves starring cats and dogs; an astonishing amount, in fact. But which of the two make the best fictional characters? And, more importantly, which of the two do you prefer?

In this first of two blog posts, we’ll focus on great fictional cats.

Proof of the power of fictional cats is the fact that the very first ones that came to mind, as I began thinking about this theme, are cats that I haven’t seen for decades, and sprang from the minds at Disney studios. Can you guess which ones?

Why, it was the two Siamese cats from Lady and The Tramp, chanting: “We are Siamee-eese if you plea-eese, ba-bum-bum-bum!”

As a child, I found them so, so evil! They were conniving, sly, slinky critters with no conscience at all, but with wit to spare.

Let’s face it, those two cats are everything dog lovers loathe about cats, but they were so deliciously portrayed that I think most cat lovers claim them proudly.

And it’s precisely these qualities that make them so attractive to both writers and readers (and not just cat lovers).

Sometimes, fictional cats are also a little unnerving, and I think this stems from the fact that they’re so difficult to gauge. Are they good or bad characters? What are their intentions?

One writer who had a lot of fun exploring the psychology of cats is poet TS Eliot, in Old Possum’s Book of Practical Cats, that most of us discovered through the musical CATS! , and which introduced us to wonderful cats named  Skimbleshanks, Mr. Mistoffelees and Old Deuteronomy.

Other enigmatic cats that made me feel uneasy, as a child, were the Cheshire Cat, with his big, wide, odd smile, in Lewis Carroll’s Alice’s Adventures in Wonderland, and even Dr. Seuss’ Cat in the Hat, who seemed, in a way I couldn’t really fathom, to delight in transgressing every rule, before setting things right again.

Another celebrity fictional cat whose intentions are always just out of our ability to grasp, is JK Rowling’s (and Hermione’s!) Crookshanks, who appears in books three to six of the Harry Potter series, and who has magical properties because he is half Kneazle.

Crookshanks also delights us because he’s such a grumpy puss, and in this category, there’s the wonderfully named Cosmic Creepers, cinema’s scruffiest, mangiest looking cat ever, I think, who appears in one of my favourite children’s movies, Bedknobs and Broomsticks, which is based on two of English children’s author Mary Norton’s wonderful books: The Magic Bed Knob; or, How to Become a Witch in Ten Easy Lessons (1943) and Bonfires and Broomsticks (1945).

While all of these felines with attitude may unnerve us just a little, they’re quickly upstaged by their wild, larger cousins.

Think only of the two heavyweights portrayed in Rudyard Kipling’s The Jungle Book, who marked our childhoods: the black panther Bagheera, Mowgli’s protector whom we are meant to love, described this way in The Jungle Book:

“Everybody knew Bagheera, and nobody dared to cross his path; for he was as cunning as Tabaqui, as bold as the wild buffalo, and as reckless as the wounded elephant. But he had a voice as soft as wild honey dripping from a tree, and a skin softer than down.”

And the terrifying tiger, Shere Khan: Bagheera’s enemy and rival. Even in the original animated Disney movie and the 2002 remake, the lethal power of these feline characters is obvious. These cats have star power!

Still, it’s hard to beat the charisma of the King of cats, the lion, whose most memorable incarnation is probably the great Aslan, who steps into The Chronicles of Narnia and changes the lives of all of the inhabitants of CS Lewis’ mythical world.

And then there are cat stories just for adults.

My thoughts of Aslan quickly shook loose memories of two terrifying, bloodthirsty lions known simply as The Ghost and the Darkness, whom most of us learned of because of the film that carries their names, though it was in fact inspired by the true story of the two killer lions who, in late

nineteenth century Kenya, stalked Colonel John Patterson and his team of workers who were attempting to build a Trans-Africa railway line.  Patterson’s account of these events, titled The Man-Eaters of Tsavo, is available online (and can be downloaded for free).

the remarkable novel that recounts the way-larger-than-life adventures of a man with the unlikely name of Piscine Molitor Patel, otherwise known as Pi, in Yann Martel’s Life of Pi. That tiger is, of course, Richard Parker (just between you and me, the moment I read his name, I knew I was going to love that novel).

But thoughts of the terrifying and fascinating Richard Parker reminded me of another, unfortunately less known, but brilliant novel by Richard Hough, The Final Confession of Mabel Stark, described this way, in the opening passage of a review in The Guardian:

“Mabel Stark née Mary Haynie, star of the 1920s Ringling Circus, trained innumerable tigers and married five husbands; evidently, she had a greater affinity for big cats than she ever did for men. From the sketchy facts of Stark’s extraordinary life Robert Hough has conjured up an action-packed fake autobiography as jaunty and acerbic as the lady herself.”

It says a lot about this novel that many years after reading it, the characters of Mabel and the tigers she worked with are still finely etched in my memory. The Final Confession of Mabel Stark takes us inside traveling circus culture, and brings us to the realization that tigers are only ever “tame” in appearance, and that inside those great cats, there remains a feral and ferocious heart.

But wait! With all this talk of bloodthirsty big cats, I may be giving fictional felines a bad rap, which they certainly don’t deserve. As a matter of fact, there are all kinds of clever, talented and courageous cats who are the protagonists not only of individual novels, but of entire series!

In the realms of fantasy and sci-fi, there’s Erin Hunter’s The Warriors series, featuring a cat named Rusty, who

joins a clan of wild cats called Thunderclan, becomes an apprentice warrior and is eventually renamed Thunderpaw. Meanwhile, in Catalyst: A Tale of the Barque Cats, Anne McCaffrey and Elizabeth Ann Scarborough introduce us to the remarkable, telepathic Barque Cats :

“[…] trained to patrol their spaceships looking for problems. When corrupt government officials declare a plague and plan to destroy animals across the galaxy, including the Barque Cats, two young people, a clever Barque kitten and his boy, an ancient Egyptian cat with mysterious powers and a hidden agenda, and a con man join forces to try to prevent the tragedy.”

And, there are all of those crime-solving cats to enjoy, like those you’ll find in Lilian Jackson Braun’s “The Cat Who…” series, featuring a reporter named Jim Qwilleran and his Siamese cats, Kao K’o-Kung (Koko for short) and Yum-Yum (yes, Siamese cats strike again and this time, they’re terrific!).

If that doesn’t sound like literary heaven to cat lovers, there’s also Shirley Rousseau Murphy’s Joe Grey Mystery series, which introduces readers to a world in which cats live the lives humans only dream of (well, almost), solving crimes on the Unites States’ West Coast.

And then, there’s Rita Mae Brown’s Mrs. Murphy series, which features a human & cat crime busting pair, thanks to the detective work of postmistress Mary Minor “Harry” Haristeen and her tiger cat Mrs. Murphy. With over two dozen titles available, you can happily hunker down for weeks.

Whether they’re strutting their stuff with a sense of contemptuous superiority, like “The Cat Bastet” (as young Ramses calls her) in the Amelia Peabody mystery series (which also features the cats Anubis, Horus, Sekhmet and Seshat), or swilling vodka and cracking wise, like the gun-crazed feline, Behemoth, in Mikhail Bulgakov’s The Master and Margarita, cats are always attention-grabbing and irresistible.

Which have I left out? Let me know by leaving a comment below.

And to all you dog lovers out there, dogs will have their day in CATS vs DOGS, Part Two (coming soon!).