I received two wall calendars for Christmas: one with images of England where my son is studying, and the other of cats doing yoga (which I see as encouragement to take better care of myself!).

There they are, glossy and pristine, with every square of every month blank, waiting to be annotated and filled with reminders of birthdays and medical or hairdressing appointments; with lunch dates and phone numbers; with my life’s near future.

Every December, when I take down the old calendar, I pause.

Another year has passed.

With 2015 days away, I become pensive again.  It’s true that January 1st is really just a human construct, as are birthdays and other anniversaries, and that the universe is indifferent to the mental notches I make as days and years pass, and yet, I know that I’m not alone in experiencing a complex mixture of thoughts and emotions composed of gratitude, a sense of loss at the moments that have passed and cannot be relived, and of urgency because there are so many more to experience. I am not alone in feeling that somehow, the fresh new calendar summons me to be more present and more mindful every day.

Before the shouts of “Out with the old and in with the new!” and “Happy New Year!”, and the singing of Auld Lang Syne begin, why not turn to the poets? A brief online search for “Poems for the New Year” yielded some beautiful verse (all in the public domain).  While I encourage you to do the same, here is a sampling of poems that touched me especially.

If the first two are more traditional, their message is bracing: Shape up! There is no turning back! 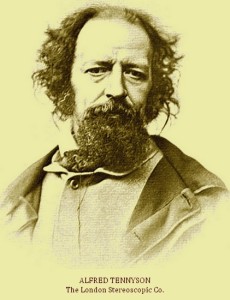 The flying cloud, the frosty light:

The year is dying in the night;

Ring out, wild bells, and let him die.

Ring out the old, ring in the new,

Ring, happy bells, across the snow:

The year is going, let him go;

Ring out the false, ring in the true.

Ring out the grief that saps the mind

For those that here we see no more;

Ring out the feud of rich and poor,

Ring in redress to all mankind.

Ring out a slowly dying cause,

And ancient forms of party strife;

Ring in the nobler modes of life,

Ring out the want, the care,the sin,

The faithless coldness of the times;

Ring out, ring out my mournful rhymes

But ring the fuller minstrel in.

Ring out false pride in place and blood,

The civic slander and the spite;

Ring in the love of truth and right,

Ring in the common love of good.

Ring out the narrowing lust of gold;

Ring out the thousand wars of old,

Ring in the thousand years of peace.

Ring in the valiant man and free,

The larger heart, the kindlier hand;

Ring out the darkness of the land,

Ring in the Christ that is to be.

The Old Year’s gone away

To nothingness and night:

We cannot find him all the day

Nor hear him in the night:

He left no footstep, mark or place

In either shade or sun:

In this he’s known by none.

Mists we on mornings see

Have more of substance when they’re here

And more of form than he.

He was a friend by every fire,

In every cot and hall–

A guest to every heart’s desire,

And now he’s nought at all.

The talk of yesterday,

But time once torn away

No voices can recall:

The eve of New Year’s Day

Left the Old Year lost to all.

It’s the economy and the imagery of the following two poems, more modern in voice, that I love:

Letters swallow themselves in seconds.

Notes friends tied to the doorknob,

So much of any year is flammable,

so little is a stone.

Where there was something and suddenly isn’t,

I begin again with the smallest numbers.

only the things I didn’t do

crackle after the blazing dies.

Not because of victories

but for the common sunshine,

the largess of the spring.

but for the day’s work done

as well as I was able;

not for a seat upon the dais

but at the common table.

The first of these next poems is Coleman Barks’** deeply personal statement, reminding every parent that beyond calendars and watches, it’s our children who embody time, irretrievable.

(**Do make sure to go to YouTube to see and hear Barks’ very honest, very masculine recitation of his poem.)

Fiesta Bowl on low.
My son lying here on the couch
on the “Dad” pillow he made for me
in the Seventh Grade. Now a sophomore
at Georgia Southern, driving back later today,
he sleeps with his white top hat over his face.

Twenty years ago, half the form
he sleeps within came out of nowhere
with a million micro-lemmings who all died but one
piercer of membrane, specially picked to start a brainmaking,
egg-drop soup, that stirred two sun and moon centers
for a new-painted sky in the tiniest
ballroom imaginable.

6) The next poem I offer to you in audio form, because that’s how I discovered it online and because its author, Richard Wilbur, recites it beautifully. The poem is titled “Year’s End”.  You can also find the full text online.

My final offering for 2015 is this lovely lovely poem by M.S. Merwin that expresses the gift of hope, untouched and still possible.

With what stillness at last

you appear in the valley

your first sunlight reaching down

to touch the tips of a few

high leaves that do not stir

as though they had not noticed

and did not know you at all

then the voice of a dove calls

from far away in itself

to the hush of the morning

so this is the sound of you

here and now whether or not

anyone hears it this is

where we have come with our age

our knowledge such as it is

and our hopes such as they are