Most people who read Steve Hamilton’s novels do so to follow the Alex McKnight detective series, but I knew nothing about either when I started The Lock Artist (2009), one of Hamilton’s two standalone novels.

I don’t remember buying it, and yet there it was, upstairs in my pile of books-to-read.

It has a beautiful cover that features a lone male character, his back turned and offering only a partial profile. He’s surrounded by the numbers and gear shapes of a combination lock, in a style that echoes Deco as it hints of noir. For me: irresistible.

I’m so glad I stumbled upon it. 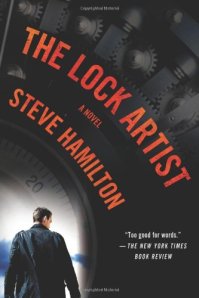 The Lock Artist is the sad and startling coming-of-age story of Michael, the artist referred to in the title. It’s also a brilliant thriller. You see, Michael’s artistry is twofold: he’s an accomplished sketch artist and illustrator as well as a lock picking, safecracking savant, otherwise known as a “boxman”. It’s around this second ability that the novel unfolds.

Michael, who’s barely into his twenties when he begins narrating his story, is a beautifully drawn, deeply affecting character that the reader cares about from the first page, in spite of the fact that he’s telling his story from a prison cell.

We’re meant to root for him, not only because he’s unfailingly honest with us (his readers), but because he’s more of a victim than anyone else in his story. And in spite of the fact that he’s battered by misfortune through most of his life, he never succumbs to self-pity, but remains true to his personal moral code, and true to the woman he loves.

However, these elements aren’t what utterly captivate the reader. The genius of this story is that its narrator can say things to us that he can’t and won’t say to anyone else (with a single, beautiful exception) because he is mute, and has been so since the age of eight, when he suffered a trauma so profound that he has been permanently silenced.

This is a tale brilliantly told. There is a boy, there is an unspeakable painful event, there is girl and there is the boy’s descent into a life of crime and intrigue, and finally, there is his elevation. 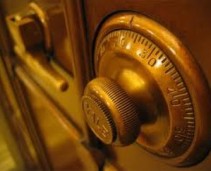 The metaphor of mutism seems particularly well-suited to telling the stories of boys and men.

Men’s silences and inner lives and the connection between feelings and language, in literature as in life, are endlessly fascinating and certainly exert a tremendous pull on me.

Another gorgeous and elegiac book in which literal muteness plays a central role is The Story of Edgar Sawtelle (2008), David Wroblewski’s astonishing first novel. It, too, is a coming-of-age story, painted with words on a broader, more classic scale.

Unlike Michael the lock artist, Edgar is born mute, not made so, yet he’ll witness events so traumatic that he, too, will be undone by them.

Edgar’s story has the drama of a Shakespearean play (especially Hamlet), the epic sweep of Kipling, the pacing and natural storytelling of Stephen King, and a profound reverence for the natural world― especially dogs, who are on equal footing with humans as characters in the book.

Though several years have passed since I read The Story of Edgar Sawtelle, I still have clear memories of the boy and of Almondine, the first watchful and constant canine presence in his life, as well as of the other Sawtelle dogs who share Edgar’s life;

and there are still vivid images in my mind of the north woods of Wisconsin in which much of the story takes place, and the sense of tragic foreboding that envelops the Sawtelle family.

Edgar’s inability to utter even the slightest vocal sound is as crucial to the novel’s plot as it is insignificant to the dogs who are also his family. It also allows Wroblewski to forge a character that is thoughtful, and whose interior life and powers of observation are deep, rich and tense.

Among the myriad fictional iterations of the connection between feelings and language, there are also the stories of the emotionally mute; characters who speak yet express little.

Several come to mind, but I’ll save them for another time.

3 thoughts on “TALL, DARK AND SILENT”