I recently finished a delightful novel. 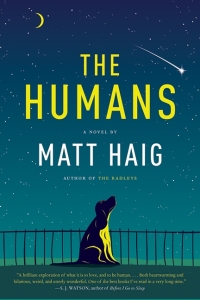 I had never heard of it prior to picking it up at Chapters. I was drawn to it by serendipity and by its graphic and whimsical cover that, contrary to the popular wisdom about making judgements based on appearances, really does capture the heart and humour of the novel.

It may also be possible that the book caught my eye because of a seed that had been planted early last year, when I discovered a straightforward and unselfconsciously joyful blog called HUMANS OF NEW YORK (known as HONY for short), which its creator, photographer and writer Brandon Stanton, recently published in book form. HONY is certainly a celebration of the spirit of New York City. It is also a beautiful collection of human cameos (or flash biographies?), updated daily (you can find them by going to the HONY blog, or as they appear on HONY’s Facebook page; both are accessible to everyone).

Brandon Stanton’s process is simple. He strolls along the streets of NYC observing people. After being granted their permission, he photographs them and then asks them a spur-of-the-moment question, or simply allows them to speak their mind. 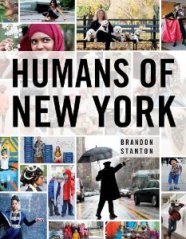 But what appears random may not be. Stanton’s eye is drawn to his subjects’ individuality, and he has a way of bringing this uniqueness out in the biographical snapshot moments he creates. For instance, an encounter with a grey-haired woman on a rainy day produced the following testimony: “When my husband was dying, I said: Moe, how am I supposed to live without you? He told me: “Take the love you have for me and spread it around.”

A visit to the blog reveals Stanton’s empathetic eye and his understanding of human frailty. The message of HONY is that we are unique, often alienated, eccentric and lonely creatures, and it is precisely these things that make the connections between us as essential and meaningful as they are improbable.

How fortunate, then, that this should also be the message of Matt Haig’s The Humans, a novel about an extraterrestrial who comes to earth and takes the form of Professor Andrew Martin, a genius Cambridge mathematician―by literally stepping into his body― who has just solved a mathematical problem so limitless in its scope and possible impact that it could bring about a utopian future where everyone on Earth enjoys immortality and infinite knowledge, or, more likely, total human self-destruction. It is the possibility of the latter which brings the alien to earth. His mission is to wipe out everyone and everything linked to Martin’s work, in order to save humans from themselves—at least for a little while longer.

This book is hilarious, wise, silly, warm-hearted, philosophical, profound and optimistic in a goofy, gorgeous and irresistible way.

Through the eyes of the alien outsider, we are made to see the agony and ecstasy of the human condition; we are given a new vantage point from which to ponder the deepest questions about suffering, mortality, knowledge and the greatest mystery of all: love.

In terms of my literary and artistic discoveries, this , happily, may be the year of the Human.

“Maybe that is what beauty was, for humans. Accidents, imperfections, placed inside a pretty pattern. Asymmetry. The defiance of mathematics.”
― Matt Haig, The Humans

“The possibility of pain is where love stems from.”
― Matt Haig, The Humans

2 thoughts on “THE YEAR OF THE HUMAN”